Alternate History (AH) - What if the Tories did better in Alberta?

Teddy here with the first in another series of posts I plan to do on alternate history.

Inspired again by a post over at 308 I decided to make some interesting posts over here.

"But are you not just copying 308?" you may ask. The answer is no.
I have an old photobucket account full of alternate history maps.

In fact, I will share a secret on the development of the ElectoMatic I use to make my election predictions and projections. The program that, though it's use of the ratio method, helped to spur others to make their own projections across Canada.

I invented it for the purpose of creating alternate history elections!

I started using it for future elections when I put in the 1979 federal election, with the 1980 popular vote, and the 1980 election (with a few errors) popped out the other end.

For this first AH story, I will presume the Alberta Tories managed to hold on to far more votes (and seats) than they did in reality in the election last month. 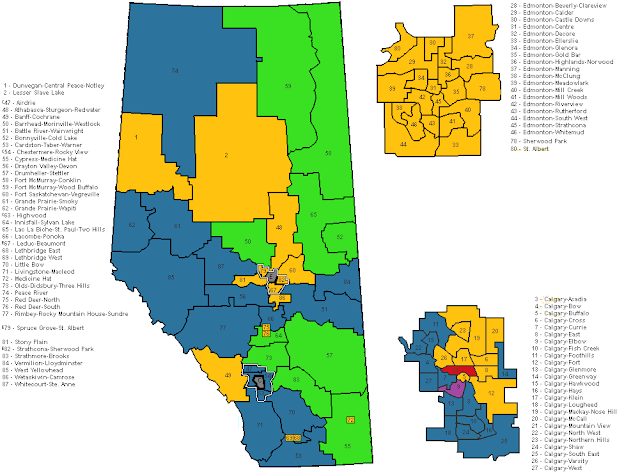 One of the first things you should notice is that a large number of seats that saw a Wildrose MLA defect to the PC Party end up being won by the Tories.

Wildrose likes to tell you all the defectors lost - and they did - but the reality is that had the PC Party won 11 seats, that 11th seat would have been a defector's seat. It was won by Wildrose by only a dozen or two votes. Another very close riding is one that saw a defector face off against an Independent who had been turned down for the PC nomination, certainly stealing a few votes away.

Another shocking thing we see, for reasons I can't fully explain, is the end of the North-South split between Wildrose and the Tories, and the start of a West-East split. The best I can figure is this has more to do with Wildrose's new leader, and the location of various oil sand deposits. Especially when compared to Wildrose's old leader, and the location of similar ridings of similar demographics.

This map also begins to show you were the core NDP support in Calgary is. I've highlighted the NDP's 5 best Calgary ridings; as well as the 3 best Liberal ridings: 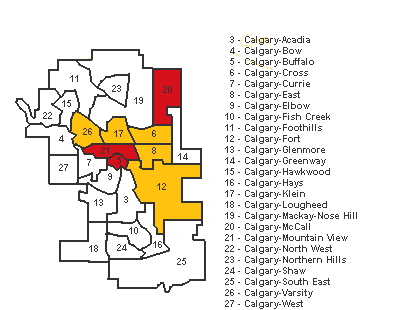 The fact the NDP actually won 2 of the seat in the Liberal "core" shows how weak the party was in the election.

If the above had come to pass I'd feel much more confidant the PC Party would be able to do anything except just die. As it stands, however, I don't see any future for the PC Party in the province, at all.
Posted by Unknown at 1:30 PM