Is the LPC Leadership Race Over?

If you look at these fundraising numbers from Pundit's Guide, I wouldn't blame you if you said it was. 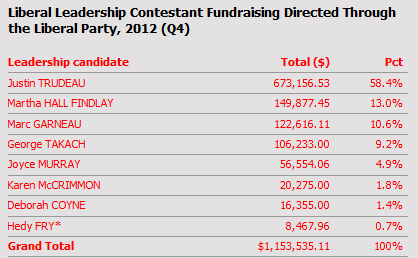 Whew. 58.4% of all fundraising done for the race so far has been on behalf of Justin Trudeau, while his nearest rivals, that being Hall Findlay and Garneau, are nowhere even close.

Now, there's still a couple of months to go, and you can never say this far out that the race is finished... but this is good evidence that Trudeau would be tremendously hard to beat. But not impossible. Just nearly so.

With this kind of advantage, taking out Trudeau will require that Justin either say something so utterly stupid his fundraising dries up and support goes somewhere else (think Todd Akin's "legitimate rape" comments; the Missouri Senate race should've be an easy lock-up for the GOP in 2012, yet they lost it by an absolutely huge margin); or Trudeau's grassroots support isn't on par with his fundraising. It is entirely possible that a lot of this fundraising isn't from the grassroots, but the party establishment. I don't know how to parse that out, though.
Posted by Kyle H. at 2:57 PM