New Sask Ridings Give NDP a Leg Up

The folks doing the federal redistribution for the province of Saskatchewan has come out with their proposed boundaries today, finally putting to rest those horrible eight ridings that broke up the cities of Regina and Saskatoon into four parts each, combining urban and suburban parts of the cities with huge swaths of rural land and smaller towns. Simply put, they sucked, and kept the NDP from winning seats that they really otherwise should have.

But, it isn't perfect, as I'll outline before, starting with Regina, which you can see the official PDF map for here, or click below for the poll-by-poll map I created. 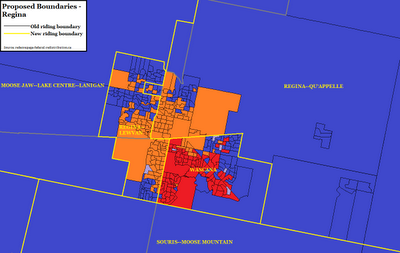 This proposal will give Regina two urban-based ridings, Regina--Lewvan and Wascana. Regina--Lewvan will take up more-or-less the western half of the capital city, divided by Lewvan Dr/Pasqua St north of the main rail line, except for the community of Walsh Acres. South of the railway, Regina--Lewvan will take the community of Lakeview, bordered on the east by Highway 6. Wascana is essentially just the old riding with all the rural parts cut out, focused on the urban parts only.

Regina--Qu'Appelle, on the other hand, has stayed the same plus the addition of Walsh Acres, and some other rural ares far outside of the city. This leaves the entire north-eastern part of the city as a rurban riding, meaning Speaker Scheer is safe. I'm not sure if they felt they couldn't do it any other way, but it seems to me that the Regina portion of the riding could have been cut out, though I don't have access to the same information the do. Still, its sad that it will continue to exist.

For the two urban ridings, Regina--Lewvan will more than likely end up in NDP hands. Lakeview itself, which made up part of the riding of Palliser in 2011 which nearly elected an NDP member, will counteract the less-friendly northern suburbs of this new riding. Noah Evanchuk, who ran for the NDP in Palliser, would have an easy time of it if he ran here.

Meanwhile Wascana gets more Liberal, which should make Ralph Goodale happy, assuming he runs again. Some Conservative-friendly parts of the riding remain, so its not going to become a safe seat anytime soon, but the loss of that huuuuge chunk of rural area will only help our stalwart Saskatchewanian.

Click here for the official PDF map of Saskatoon. 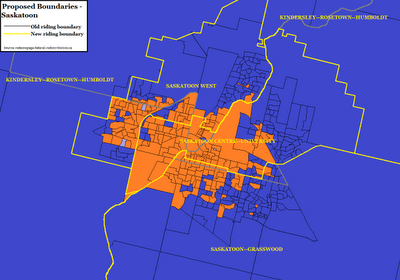 In Saskatoon, we have much the same situation: two redistributed urban-based ridings (Saskatoon West and Saskatoon Centre--University), and one rurban riding (Saskatoon--Grasswood), though the latter is definitely not as egregious as Regina--Qu'Appelle still is, or the former Saskatoon--Humboldt was.

Looking at these ridings, though, they definitely look.... funny. Saskatoon Centre--University is the best example of that, stretching west-to-east across the South Saskatchewan River, getting squeezed between the two other Saskatoon ridings. Maybe its my personal preference. Either way, the riding is an easy NDP lock, taking in the orangest parts of the old ridings of Saskatoon--Rosetown--Biggar and Blackstrap, plus a little snippet off of Saskatoon--Wanuskewin which was all NDP. Plus it has the word university in it, you just know its going NDP. This said, there is a suburban portion in the east of the riding that trends Conservative.

Saskatoon West is a little less of a lock for the NDP under these provisional boundaries, though it definitely leans towards them. I'm not sure what major communities it takes in, but essentially it covers the provincial ridings of Saskatoon--Fairview, Saskatoon--Massey Place, Saskatoon--Meewasin, and the western portion of Saskatoon--Riversdale. Its a very suburban riding, and suburbs trend Conservative. This makes the riding a little more dicey for the NDP, who have a strong base in the southern portion of the riding, and the Conservatives have a base in the northern part, plus have made inroads in the southwestern communities. As I said, still a good bet to go NDP, but not necessarily a lock like Saskatoon Centre--University.

Finally, Saskatoon--Grasswood is just a shrunken version of Saskatoon--Humboldt. This will make the riding a lot more favourable to the NDP, but the Conservatives have a strong presence in the suburban parts of this new riding, not to mention a virtual monopoly on the rural portion. Leaning Conservative, but could be competitive in the right climate.

The rest of the province also goes through some changes, though nothing spectacular that will make any of them change hands. The one exception may be Desnethé--Missinippi--Churchill River, which has a portion of the riding chopped off and given to Prince Albert. I looked at the polls for this area and its heavily Conservative, and could mean as many as 650 Conservative votes lost, compared to maybe a little over 100 NDP votes. This riding was very close in 2011, with the NDP losing it by just under 800 votes. So it was always going to be a competitive riding, however the boundary changes have made it just a little bit more so.
Posted by Kyle H. at 4:38 PM