Forum seems to always lead the trends these days. The above numbers are the highest the NDP have been since the late '80's or early '90's, a good sign for Thomas Mulcair. I've got the full results below: 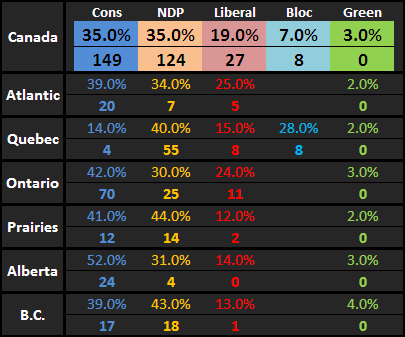 So it remains a Conservative minority, but only because the NDP are unable to hit them down in Ontario, and that remains their biggest problem.

But if this poll holds up against others that come out, it's evidence of a "Mulcair bump," especially in Quebec (though the Bloc, at 28%, is a clear threat, so maybe the problem isn't totally solved yet).

In the Prairies and BC (I don't buy the Alberta number), it's also evident the NDP are polling stronger. But as always, Ontario remains the kicker. Until Mulcair earns the trust of voters my province, he's not going anywhere fast.
Posted by Kyle H. at 9:04 PM